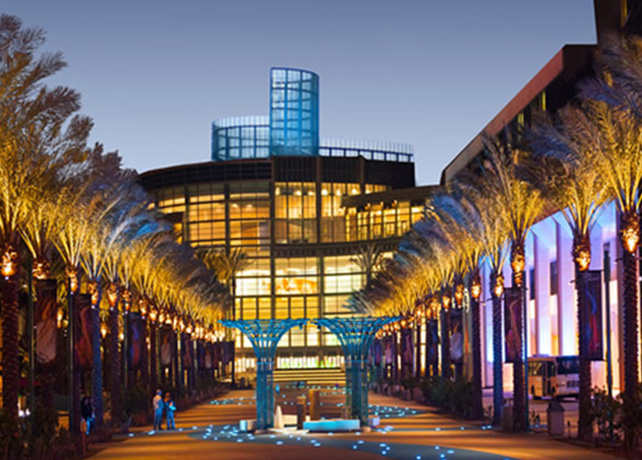 Anaheim is best known as the home of the “Happiest Place on Earth,” the Disneyland Resort. However, the Anaheim Convention Center is also a major part of the city. The newest expansion, which officially opens on September 26, will make it the largest convention center on the West Coast.

This Anaheim landmark has been in operation since 1967 and has undergone five previous major expansions, this latest one being the sixth. It has played host to epic events throughout its history including presidential speeches, Olympic events, rock concerts from the greats (think Elvis and Jimi Hendrix), the NAMM Show (National Association of Music Merchants), and, of course, giant Disney expos.

The 2017 expansion adds an entire new wing to the already sizeable Convention Center including a 10,000-square-foot balcony that will overlook the Park, giving visitors a birds-eye view of the nightly fireworks. What better way to end a busy event day than to unwind with the glitter and glamour of a Disney fireworks show?

There is so much excitement building in the business and entertainment worlds around the newly-expanded center that the grand opening is still nearly a month away and already the calendar is filling up beyond expectation. This is quickly going to be the number-one location to check out the latest expos and attend your industry’s annual conference.

Best of all, with the convention center so close to the magic of Disneyland, you can easily turn a work conference into an unforgettable family vacation. The kids can experience all the excitement of the theme park while you tackle the business at hand during the day, then reunite for all the wonders Disneyland has to offer into the night.

The Anaheim Convention Center is a half mile from the Tropicana Inn & Suites and our sister property, the Camelot Inn & Suites. It’s just about a 15-minute walk away. With such close proximity, there is no need to rent a car or search for parking, whether you’re going to the convention center or Disneyland itself. Simply pure enjoyment, hassle-free.